The Tshepo Institute for the Study of Contemporary Africa

The Tshepo Institute for the Study of Contemporary Africa website can be found at: https://researchcentres.wlu.ca/tshepo/index.html

I just returned from the annual conference of the African Studies Association (ASA) of the United States in Washington, DC.  Just before leaving I attended a session entitled “Trump and Africa” organized by a group called Critical Investigations into Humanitarianism in Africa (CIHA).  It was interesting (to say the least) and raised some important issues.  Presented as an open discussion, the session focused on a few big themes including military intervention, human rights, NGOs and humanitarianism (with HIV/AIDs a main topic of discussion), authoritarianism and climate change.  The presenters began by summarizing their views on the election results, going as far as declaring that fascism has come to the US and that perhaps we’ve entered an era in which African countries should send democracy monitoring groups to the States rather than vice versa.  That certainly set the tone!  You can read the full statement here: http://www.cihablog.com/next-119-u-s-reactions-plea-lessons-wisdom-friends-colleagues-africa/

The comments that followed from the audience were interesting and I present some highlight here in the hopes of stimulating a larger discussion.  Trying to find a positive spin, one commentator said that perhaps Trump’s incoherence and isolationism might lead to a hands-off approach to Africa that could be good for the continent.  Another wondered whether Trump really will be much different than the Presidents Bush and Obama, who have pursued military policies in Africa that – according to the commentator – can’t exactly be called ‘humanitarian.’

Most other comments, however, were less enthusiastic.  Many of the attendees worried about the prospect of support for authoritarian states, and reduced funding for research in Africa, and especially the implications of the American election for HIV/AIDs initiatives in African countries.  On the topic of authoritarianism, an ASA representative reported that one Ambassador from a non-democratic African state seemed very happy about the Trump victory, and even passed out pamphlets inviting Americans to visit because his country was stable and open for business.  On HIV/AIDs, many worried that American policies towards reproductive right associated with Trump might affect funding for HIV/AIDs research and programs.  To me, this concern seemed the most well founded.

One particularly interesting exchange involved a conversation about other non-democracies and their relationships with Africa.  One of the audience members wondered aloud if Trump might establish the USA as ‘another China’ in Africa.  The session organizers replied by defending Chinese (and Cuban) policies in Africa by pointing to their ideological legacies of anti-colonialism and African liberation.  Trump in their view threatens to bring a non-democratic agenda to Africa without – in the opinion of the organizers – the positive ideological foundation of China and Cuba.  I’ll leave it to the readers of this blog to sort out how they feel about that idea.

Perhaps the best idea to emerge out of the session was a call or scholars and activists to lobby the US government and advocate for positive African policies that will benefit the recipients.  This apparently is starting to happen already, and it will be interesting to see the result.

For more reactions to the election, please consult this area of the CIHA’s blog:

Whatever happens, 2017 promised to bring an important (and probably unpredictable) new phase of US-Africa relations.

The town of Loiza, Puerto Rico, is particularly rich in colonial and ethnic history. Traditionally one of the largest sugar-producing sectors on the island, it became the settlement for freed West African slaves following abolition. Unlike the rest of Puerto Rico’s predominately Spanish make-up, Loiza is a cosmopolitan municipality that combines all ethnic origins of the island, Taino, European, and African, into a secular community.

Although I have never visited West Africa, I lived in Kenya during August of 2014. The sights in Loiza are quite comparable. The housing in Loiza differs from other municipalities in Puerto Rico as many are constructed out of concrete blocks versus singular concrete walls, similar to the apartment buildings and school houses of rural Kenya.

My favourite part about visiting Loiza was partaking in a traditional Bomba dancing class. Originating from the sugar plantations as a ceremonial activity, this form of music and dance allowed slaves to freely express personal emotions in response to enslaved life. La Corporacion Piñones Se Integra (COPI) is a non-profit community organization invested in the education, instruction, and preservation of traditional African music and dance. Specializing in the instruction of Plena, a traditional dance distinguished for the playing of hand drums, and Bomba, a dance central to Afro-Puerto Rican culture with music characterized by large barrel drums, the COPI centre provides locals and tourists with a unique learning experience.

The La Bomba de Loiza style is so central to this municipality that it was the genre we learned to perform. During rehearsal, passing locals shouted encouragement “to move our hips” and videotaped the final performance. It was a time of delightful high energy and happiness communicated through sweaty feet and smiles. The awkwardness the group initially felt upon arrival slowly melted away alongside the guidance of our lovely instructor.

What is so fascinating about learning the Bomba is the relationship that exists between the dancers and musicians. One female of the dance troupe is considered the “lead” and must direct the drummers via body language communication. One drummer marks hand gestures, arm, and skirt movements with a beat while the others maintain the rhythm of the dance. This highly percussionist expressionism is a form of universal communication. Regardless of our language barriers, my group and I were able to tell a historical story alongside our musicians, making this class a truly magical experience. 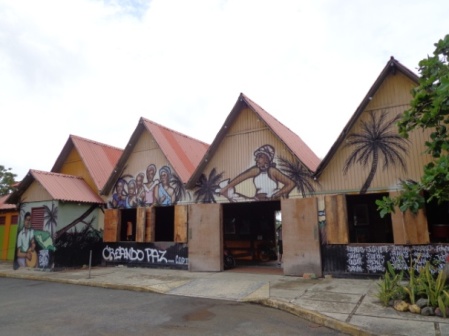 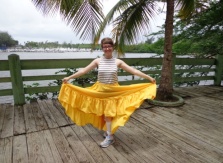 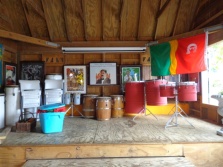 Top Right – Preparing to dance the Bomba in a traditional performance skirt.  Photo by Stephanie Newhook